Press: The Toronto Star, Shawn Mendes Wants to Be… 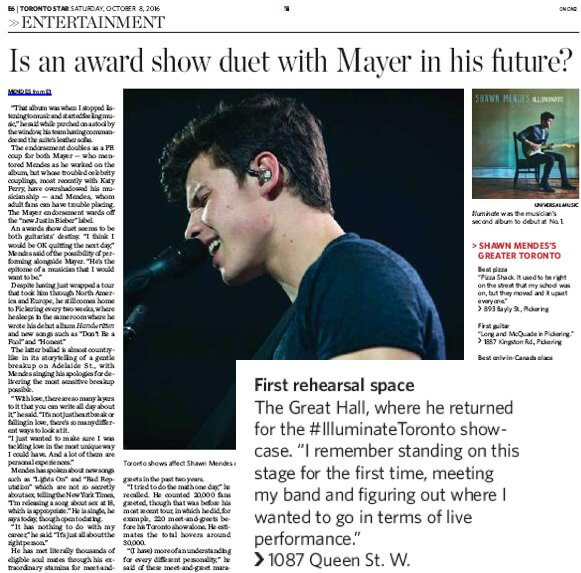 The Toronto Star Shawn Mendes’ interview about his pop-up show return to The Great Hall and his Greater Toronto go-tos.

“It still smells like cedar at the newly remodeled concert venue The Great Hall as a giddy crowd of nearly 500 kids — ranging from college-aged cheering squads to actual children accompanied by parents — await Shawn Mendes.

The 18-year-old Pickering native turned international guitar-pop sensation will perform a 45-minute showcase for a mix of social-media stars, contest winners and diehards who lined up outside the venue — some overnight.

When he takes the stage in jeans and a T-shirt, he’s greeted by screams and smartphone salutes. The hashtag #IlluminateToronto will soon become the No. 1 trending topic on Twitter across Canada.

The crowd at the Queen West venue, last Saturday, knows songs from the new album Illuminate by heart, even though it was released only eight days earlier, becoming Mendes’s second to debut at No. 1 on both the Canadian SoundScan and Billboard Top 200 Albums charts.

There’s a more muted response, however, to musical improvisations, such as the band’s mini-jam during new song “Ruin.” While a Mendes show is a tightly choreographed affair, down to the timing of when he shouts “Sing!” this looser style of musicianship seems to be his long-term ambition.

In an interview in his dressing room that afternoon, Mendes says he long promised friends he’d break into a guitar solo on tour, ultimately riffing off script during a show in Vancouver. He’s named John Mayer as a musical hero throughout the promotional campaign for Illuminate, specifically Mayer’s 2006 album Continuum that features “Waiting on the World to Change” and came out when Mendes was 8.” READ FULL STORY

“The Great Hall, where he returned for the #IlluminateToronto showcase. “I remember standing on this stage for the first time meeting my band and figuring out where I wanted to go in terms of live performance.”’