In the late 1880s Toronto’s West End Young Men’s Christian Association (YMCA) sought a new home to accommodate its burgeoning membership and expanded activities. YMCA Chairman and local businessman spearheaded this mission. Along with officers of the organization, Moore launched fundraising efforts in order to secure a plot of land and pay for the construction of larger home for the West End YMCA. A prime site at the corner of Queen St and Dovercourt Rd was purchased for $10,000, and Moore entrusted the design of the building to prominent architectural firm Gordon & Helliwell, well known for their many distinctive churches and institutional structures across Southern Ontario. With $30,000 raised from the membership for the new building, construction began with the cornerstone laid on November 13, 1889. The result was an ornate, High Victorian edifice that covered the entire 50’x130’ lot. The three-storey façade was constructed of red brick, with decorative Port Credit sandstone motifs, topped by a peaked slate roof. The frontage on Queen St featured a flagstaff tower and a domed corner turret housing panoramic bay windows overlooking the surrounding area. These signature towers, tall arched windows, and other design touches drew influence from the Queen Anne Revival style so popular at the time, as well as the architects’ university campus and ecclesiastical works.
From the main entrance on Queen St, stairs led up to The Main Hall, located on the second floor, which served as the building’s showpiece and central focus. This auditorium, with a capacity of 1000, spanned two levels, with a cast iron balcony supported by gilded pillars, fronted by a stage for performances and lectures. The street level included the library, lecture hall, reading room, bowling alley, swimming pool, and a gymnasium featuring an elevated circular wooden running track.

The ambitious project was completed within a year, and the building was officially opened to the public on October 9, 1890. The very next night, the Main Hall hosted its first-ever concert, a mixed bill of local talent, which earned an effusive review in The Mail:

“…the result makes kindred effort in this section of the city no longer tentative. That so much real ability in these the opening days of the new building was proffered is in itself a matter of profound congratulation.”

Physical fitness was integral to the mission of the YMCA, and The Great Hall’s new facilities quickly became popular, with some of the earliest basketball games ever played taking place in the gymnasium. The West end YMCA was also a training base for dairy magnate Morden Neilsen, and world famous distance runner, Tom Longboat. In March 1907, a thousand spectators lined Dovercourt Rd to watch as Longboat set a new record on the YMCA’s 2.5 mile course, which served as a warm-up for his triumph in the Boston Marathon one month later. 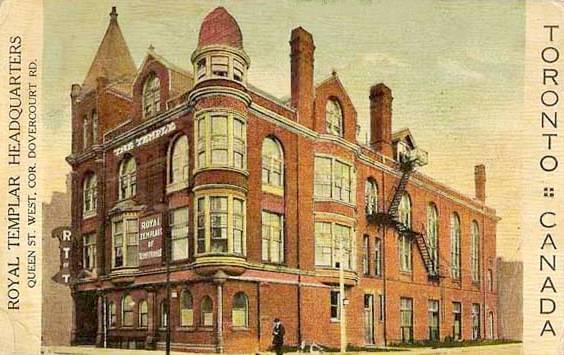 In 1912, the West End YMCA elected to move to a new location at College St and Dovercourt Rd. In May of that year The Great Hall was sold to the Royal Templars of Temperance, a fraternal organization that espoused the prohibition of alcohol. Soon after the purchase, the group voted to move their Ontario headquarters from Hamilton to Toronto, to be housed in the newly renamed Royal Templar Hall. In addition to the sale price of over $30,000 the Templars pledged $5,000 to completely renovate the building. The move would be also accompanied by a three month “temperance campaign” aimed at driving membership and awareness.

Just before the Templars’ scheduled reopening in early October, a fire caused over $14,000 of damage to the building. While several workers had to escape the flames by walking across the roof, none were hurt, and the building was repaired and ready for the grand opening with only two months delay.

Temperance was in vogue at that time in Ontario, and Royal Templar Hall served as a multi-purpose venue for lectures, speeches, entertainment, fund-raising drives in support of the war effort, and a “well-baby clinic” established during the post-WWI flu epidemic.

This era of ownership saw the hall host a gathering of psychics on Boxing Day, 1920. Spiritualist and author A.D. Watson promoted his book, The Twentieth Plance, with a “trance address” on the topic “What & Where is Heaven”. The audience included famed author, Lucy Maud Montgomery, who came away unimpressed.

In December 1929, mayoral candidates Sam McBride and Bert Wemp debated in the main hall. What had been an exceedingly contentious campaign continued that night as insults were hurled across the stage.

In 1931, Royal Templars of Temperance merged with another fraternal organization, the Independent Order of Foresters (IOF). Due to the merger, the IOF came into possession of the building at 1087 Queen St W, and elected to make it their headquarters. After a round of renovations, the head of the IOF, Supreme Chief Ranger Frank E. Hand, officially reopened The Great Hall as the IOF West End Temple with a dedication gala on Feb. 14th 1933.

By the beginning of the1940s The Great Hall changed had hands once again and became the headquarters of the Polish National Union. It housed the offices and printing press for a Polish community newspaper and, during the Second World War, served as temporary housing for refugees from Europe. The building saw great use as a community hall for Poles and other Eastern Europeans in Toronto, hosting such events as the Slavic Bazaar to raise money for the Canadian Aid-to-Russia Fund, and meetings of the Canadian Polish Congress’ national council.

Throughout the mid-20th century The Great hall continued to serve as a hub for the Polish community in Toronto. The Polish National Union presented a multitude of fundraisers and showcases featuring Polish dance, music, and cuisine; through the 1970s the building served as the Polish pavilion for the Caravan Multicultural Festival. In 1973 the City of Toronto designated The Great Hall as a heritage site.

By the mid-1980s, The Great Hall housed a diverse group of tenants in the vanguard of the Toronto art scene. The Theatre Centre, YYZ Gallery, the Toronto School of Art, and the Music Gallery were long-time residents, bringing together the best in avante-garde and experimental music, performance, and visual art. That legacy has continued in recent years with unique, multimedia events like Long Winter and Art Battle.

From opening night in 1890 to today, The Great Hall earned a reputation as a premier venue for musical performance featuring local and international talent. Over the past 25 years its stage has been graced by an eclectic array of artists, including Sonic Youth, City & Colour, Gilles Peterson, Feist, Daniel Lanois, Metric, and Sloan.

Public speaking and community events have long been a mainstay at The Great Hall, a great number of dignitaries appeared there over the years, including author Michael Ondaatje, and astronaut Commander Chris Hadfield. In the 21st century the building has held events for the Toronto Jazz Festival, Nuit Blanche, Summerworks, CBC Literary Prizes, and We Day. The Great Hall has hosted events for some of the world’s best-recognized brands from technology (Google, Twitter), banking (CIBC Scotiabank, TD Bank), and more (Heineken, Fido, Red Bull). These entities have solidified The Great Hall’s reputation as a prime event venue in the modern era.

Just as it had 85 years ago, in 2015 The Great Hall played host to political campaigns as the setting for two innovative live-streamed events in the run-up to Canada’s federal election. NDP leader Tom Mulcair, and Liberal leader (and eventual Prime Minister) Justin Trudeau both appeared on stage for a Vice Canada town hall series in which they shared their views and policies on a range of topics in front of a live audience.

In 2016, owners of The Great Hall completed a comprehensive renovation and modernization of the exterior, event spaces, and amenities. This exhaustive endeavour spanned the entire structure, with special attention paid to revealing the unique history of the building and its many incarnations through the years. In addition to the fully refinished façade, architectural details throughout The Great Hall’s interior were diligently restored to their original beauty. The renovation allowed for an increase in capacity, and infrastructure updates included new washrooms for all venues, a modern HVAC system, and the addition of state of the art audio-visual systems in the performance venues. Accessibility was also brought up to date with the installation of an elevator; no small feat in a building over 125 years old.

This achievement was the culmination of a multi-year revitalization process, with support from city officials and the surrounding community. After hosting the West End and the world for over 125 years, The Great Hall now begins a new chapter as the hub for community and culture in Toronto.